Have you ever heard a full orchestra performing a majestic symphony? The conductor paints a most beautiful tone color by skilfully commanding an interplay of the instruments and as the excitement in the audience builds at very rapid rate, we anticipate the magnificent musical climax. But then, abruptly, every instrument is brought to complete silence. The audience holds its breath as we await the conclusion of this story in sound...a whole-rest pause has been introduced to heighten the emotion of this dramatic moment of expectation. A pause, a rest period can be used with intense effectiveness to add strength and power to the rich depths of a moment in time. We see this so powerfully in the Gospels.

In the Gospel of John we watch as Jesus makes powerful use of a dramatic pause. The Pharisees had coordinated what they must have thought was a full proof plan to trap this much hated "Rabbi". The woman was caught in adultery, they had dragged her into his presence, they had gathered up their bricks to stone her.

The scene was set.

And now they confronted the "Teacher". In their view, there was no way out for Him. They had
covered every base and He would have to condemn her to death or deny the Law of Moses.  Jesus, the Master Musician, introduced a dramatic pause in that climactic moment of tense expectation: "They were trying to trap him into saying something they could use against him, but  Jesus stooped down and wrote in the dust with his finger." (Jn 8:1-77)

The Master had expertly brought the dramatic pause to impose silence on the anticipated violence.

AND JESUS BROUGHT THIS SINNER TO SPIRITUAL LIFE.

When the Lord's friend, Lazarus was dying, the Savior imposed a waiting period of 4 days before He went to the home of His friends. Lazarus had by that time died, was prepared for burial, bound in burial cloths, placed in the tomb.  There could be absolutely no doubt that Lazarus was dead.

Jesus stood before the tomb AND HE PAUSED.

All eyes were on Him, absolute silence filled the taut air.

"Then Jesus looked up to heaven and said, “Father, thank you for hearing me.  You always  hear me, but I said it out loud for the sake of all these people standing here, so that they will  believe you sent me.”

AND JESUS HAD BROUGHT A MAN BACK TO LIFE FROM THE DEAD. 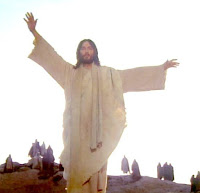 And so it is that we arrive at this day in Holy Week. Holy Saturday. The Passion and Death of the Lord is behind us.

We walked with Him along the Via Dolorosa as He absorbed our ugliness to give us His Beauty.  And now, we are made to pause. A silence descends into our souls as we await the glory of His Resurrection when God will raise Jesus to life.

What do we hear the Lord whisper to us in the deep quiet of our souls as He "writes in the dust with His finger".


Are our lives being silently woven into the Passion and Death and soon to be Resurrection of Our Savior?

Posted by Anna Rae-Kelly OCDS at 4:11 AM

Thank you for your feedback!